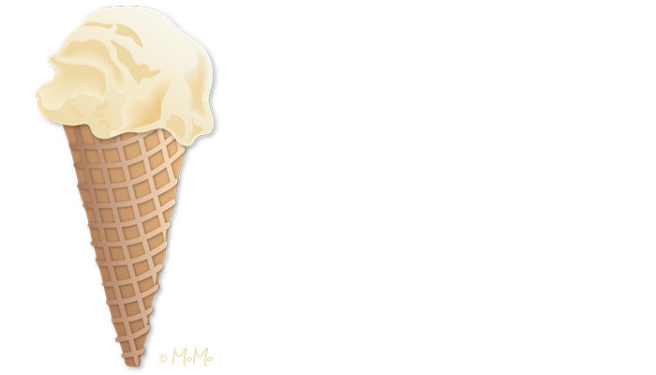 One early evening when I was preparing dinner, my husband John nonchalantly walked into the house carrying a half-gallon container of Schwan’s ice cream.  When I saw him, I immediately grilled him about where he had gotten the ice cream and begged, “Tell me you didn’t buy that!”  He looked at me with absolute confusion and hesitantly said, “No… I didn’t buy it, the Schwan’s man gave it to me.”  He then went on to explain that he had been outside talking to the neighbors across the street when a Schwan’s ice cream truck pulled up and the salesman got out and introduced himself.  Our neighbor greeted him and asked if he had any samples of ice cream.  At that request, the Schwan’s man reached into his truck and gladly handed each of them a half-gallon of ice cream to sample.

With this information, I exclaimed, “Oh no, that’s even worse!”  I stopped chopping the vegetables for our salad and frantically ran to the front door, still holding my chopping knife and looked out the door in both directions for the Schwan’s man.  When I spotted him, I informed John that he would just have to return the ice cream to the Schwan’s man and kindly tell him that we are not interested in any of his products.  John looked at me like I was crazy.  Seeing my husband’s worried look, I put the chopping knife down and calmly tried to explain to him that Schwan’s ice cream salesmen are relentless in their pursuit to sell overpriced ice cream.  I complained, “Now that salesman will be hounding me to buy his products! Don’t you know they stalk their victims until they give in and buy all kinds of food they don’t need and can’t afford.”  I then explained to him that my friend Paul had made the mistake of accepting a free container of ice cream from a Schwan’s man and afterwards that salesman pestered him for weeks until he finally broke down and bought something.  My husband just shook his head and chuckled, ignoring my demand to return the ice cream and dismissed my ranting, figuring it had been a long week juggling our two kids and trying to work from home.

A few days later, I pulled into the garage after grocery shopping with our one-year-old son, Sean and three and a half year old daughter, Meghan.  Sean had fallen asleep in his car seat so I didn’t disturb him but I helped Meghan out of her car seat and then walked around to the back of my Cherokee Jeep to open the tailgate and grab the groceries.  As soon as I lifted the tailgate, a voice from behind me asked if I needed any help.  I screamed and jumped about a foot, nearly banging my head on the tailgate.  When I turned around, the Schwan’s man was standing there with a big grin on his face.  He seemed to have appeared out of nowhere, scaring me to death.  He apologized for scaring me and asked if he could help me with my groceries.  I looked at him with contempt and answered curtly, “No thanks, I’ve got it!” He followed me all the way through the garage to the door to the house, I turned and looked at him and said, “Really, I can manage all by myself.”  He stood there for a moment and then turned around to leave and I called out to Meghan to come inside with me, then I shut both the doors as soon as he walked out of the garage.  I walked to my kitchen and put down the grocery sacks I was carrying and thought about how creepy that encounter was.  I waited a few more seconds before venturing back into the garage to retrieve my sleeping boy from the car and the rest of the groceries.

After that incident in my garage, I made the decision to avoid the Schwan’s man at all cost.  I don’t know if it was a coincidence or if the Schwan’s man was stalking me but for the next few weeks, whenever I was pulling into the driveway, I would see the Schwan’s truck turning the corner.  He kept reappearing like a bad dream.  I would get Meghan and Sean out of their car seats as fast as I could and frantically grab whatever packages or items out of the car and shut the garage door and run into the house carrying Sean and dragging Meghan along, like I was being timed. Sure enough, two seconds later my doorbell would ring.  I would sneak over to the door and look through the peephole and the Schwan’s man would be standing there.  I would then put my finger in front of my lips and gesture to the kids to be very quiet. We would hold hands and tip toe downstairs as the doorbell rang again and again.  Meghan, who started speaking in sentences when she was a year and a half old and was very expressive, looked at me and whispered in her cute little voice, “Why are we not opening the door, Mommy?”  I looked at her very seriously and whispered back my answer, “Because it’s the Schwan’s man.”  We stayed still for a few minutes longer and then slowly ventured back upstairs into the rest of the house and continued on with our day.

Dodging the Schwan’s man became an almost daily occurrence for my kids and I during the following weeks.  If we were outside in front of the house playing and saw the Schwan’s truck turning the corner, we would run inside and lock the door and be very quiet and wait for the door bell to ring, sure enough it would ring two or three times until he would finally give up and leave.  One day in particular, I was sitting out front on our porch and taking a break while Sean slept and Meghan rode her little red tricycle around on the sidewalk. After a while, I needed to head back inside to finish up some work.  Meghan had ridden her trike down the sidewalk past the house next door and almost to the corner.  So, I called to her to come back home.  As I called out to her, I saw the Schwan’s truck turn the corner.  I then started to frantically call Meghan back home in a panic and was excitedly waving my hands, jumping up and down and shouting to hurry up. She turned to look at me and saw the Schwan’s truck coming around the corner so she turned her trike around and started pedaling for home as fast as she could.  She faced forward with a very determined expression and rode her little heart out to get back and into the house before the Schwan’s man arrived.  I still marvel at how fast her little legs moved on her trike that day.  We did our usual run into the house and lock the door routine and sat very quietly while the doorbell rang and rang.  Meghan looked at me and whispered, “Ooh, that was a close one Mommy!”

That was the last time we encountered the Schwan’s man.  Perhaps our efforts to avoid him was finally obvious or he just finally gave up on any sales from me.  A few days later my neighbor was over having coffee with me in my kitchen and we somehow got on the subject of the Schwan’s man.  I was telling her about the last few weeks of our Schwan’s man adventures and when I got to the part about Meghan pedaling her little trike home as fast as she could, Meghan interrupted my story and blurted, “Yeah, and the Schwan’s man almost got me!”  I burst out laughing and then I was horrified with the realization that all along I hadn’t explained to Meghan why we were hiding from the Schwan’s man. I had no idea that all that time she thought the Schwan’s man was a boogieman in an ice cream truck, out to get her!